We use cookies to offer you content, publicities and services tailored to your interests and to compile visit statistics. By continuing to use this website, you agree to our use of cookies unless you have disabled them through your browser. For more information, please see the Terms and Conditions.
I accept Whether sailing to new horizons or finding peace on known territory, love at Bota Bota exists in many different ways.
Four of our sailors reveal the names and stories of those who fill their hearts with love.

Sacha, Site agent at Bota Bota, tells the 2-year love story between him and his girlfriend Abagael. Both Haitian-Canadians, they are a «strange, cute and ambitious» couple. 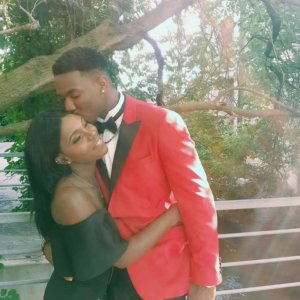 How did you two meet?:
“We met at the hotel we were both working at, on my third day on the job. I was focused on my tasks and she sort of appeared out of nowhere. After having greeted my boss, she looked over to me and didn’t really stop looking at me. I really liked her personality. As days would go by, my need to see her would grow despite feeling shy and embarrassed. Three months later, I finished my last week on the job before going back to CEGEP and starting American football practice. I really wanted to ask her for her number. But as days went by, I was too shy to ask her. So, I missed the opportunity to do so, and told myself that I would see her again soon. After the football season ended, I received a call from my manager to work on the weekends. I went there on a Saturday, without thinking she might be there. I went to the third floor and she appeared at the corner of a hallway. She was so happy to see me again that she ran over to me and hugged me. And that’s where I asked her for her number”.

What is an unusual fact about your couple?:
We take each other’s bad habits.

How do you envision the future together?:
Getting married and having kids (after my studies of course).

Something you love about your girlfriend:
Her boundless energy and her curiosity.

Something that annoys you about your girlfriend:
Her poor memory.

Something your girlfriend doesn’t know about you:
She knows everything.

Your favorite treatment or massage at Bota Bota:
The Yoga-Thai massage.

Her favorite treatment or massage at Bota Bota:
The Deep Tissue massage.

Favorite memory together:
Celebrating our first year together.

Meagan, a Canadian floor manager at Bota Bota, looks back on the turn of events that led to her meeting Ken, her French husband, who has been in her life for four and a half years. This “fun, adventurous and loving” couple also share their life aboard the Bota Bota! 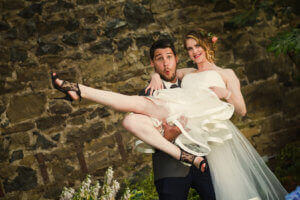 How did you two meet?:
“While working a 16-hour day between two jobs, I had three regular customers that invited me out for a drink after my shift to thank me for serving them during their business trip. At that point I had my second migraine of the day and told them that it was unlikely unless I felt better. At the end of my shifts miraculously my migraine was feeling better and the bar which they invited me to was on my walk home so I decided to pop in for that drink as it was a bar I had never been to. While enjoying a cocktail a handsome man caught my eye beside me at the bar, he smiled and we cheers’d once, then again during our second round. Before leaving I decided to write my name and number to give to him and said goodbye to the gentleman I was with. The handsome man came up to me and asked me if he could give me his number. I handed him the paper I had already prepared for him (which he keeps in his wallet to this day). After he called to ask me out, we realized we both lived on the same street, a block apart. It was serendipity at its finest, in a bar that neither of us would have normally gone to, without a word exchanged, I met the love of my life. Four and a half years later, we’ve travelled to 19 countries, lived between France and Canada, and are continuing the adventure that is our life.”

What is an unusual fact about your couple?:
Both of our hometowns are harbour cities on two different oceans: Victoria and Rochefort.

How do you envision the future together?:
Adventuring around the world.

Something you love about your boyfriend:
His kind heart, sweet nature and ability to always me make smile.

Something that annoys you about your boyfriend:
He remembers everything which makes him often right…

Something your boyfriend doesn’t know about you:
I’m a crazy cat lady with no cats (for now).

A ritual you both share:
Watching Game of thrones.

Your favorite treatment or massage at Bota Bota:
A duo Therapeutic massage.

His favorite treatment or massage at Bota Bota:
A solo Therapeutic massage.

Favorite memory together:
There are so many to choose from, but I guess it would have to be our wedding day.

Ming, massage therapist at Bota Bota, of Chinese-Canadian descent, recounts his first encounter with his Canadian wife Patricia, 8 years ago. “Reliable, loving, understanding” are the three words that Ming uses to describe his couple which finds balance in their differences. 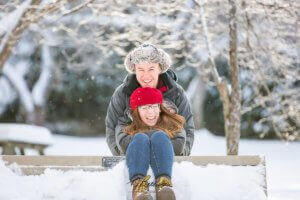 How did you two meet?:
“At school, our best friends started dating and Patricia took an interest in me.”

What is an unusual fact about your couple?:
We don’t share many activities in common. I’m very much into sports and she prefers art and reading.

How do you envision the future together?:
Filled with love and a big family.

Something you love about your girlfriend:
Her patience, in everything she undertakes.

Something that annoys you about your girlfriend:
Sometimes, she’s a bit too calm!

Something your girlfriend doesn’t know about you:
I love surprise parties. They’re just not surprises anymore when I ask her to do them for me!

A ritual you both share:
Cleaning our home together and sharing responsibilities.

Your favorite treatment or massage at Bota Bota:
The Lomi Lomi Nui massage.

Her favorite treatment or massage at Bota Bota:
The Swedish massage.

Your favorite memory together:
Our wedding day.

Maryse, born in Canada of Vietnamese-Cambodian origin, Chief Manucurist at Bota Bota, looks back on the the path that led her to Adam, her “sooo Canadian” boyfriend, two years ago. “Love, communication and sharing” are the words that she believes best describe their couple. She insists, on the fact that: “Sharing can easily be replaced by food. It holds a very important place in our lives”. 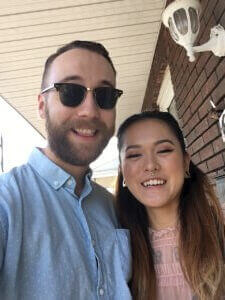 How did you two meet?:
“We did not expect it at all … but on Bumble [the dating app]! I sent him a message when he insisted on prolonging the conversation another 24 hours. We talked for about 2 months before exchanging phone numbers to meet in person at a bar. I never go to bars … I was very stressed”.

What is an unusual fact about your couple?:
We realized we’d both been tattooed by the same artist!

How do you envision the future together?:
Moving in together and visiting St-John’s this summer. We sometimes dream about leaving the city…

Something you love about your boyfriend:
He always finds a way to comfort me when I’m not doing well.

Something that annoys you about your boyfriend:
He’s messy!

Something your boyfriend doesn’t know about you:
I’m an open book, it’s too hard!

A ritual you both share:
Getting Pho at Pho Tay Ho, every Sunday night.

Your favorite treatment or massage at Bota Bota:
A Northern star facial treatment and a Lomi Lomi Nui massage with Jeannine!

Your favorite treatment or massage at Bota Bota:
He loved his pedicure… 😉

Favorite memory together:
Our Christmas vacation with his family and our second date… it’s hard to choose one!